Congratulations to Meadowlands resident Robbie Allen for his selection as the 2016 Southeast Regional Coach of the Year for the NJCAA Division II.  Robbie is baseball coach at Brunswick Community College where he has been since 2008. 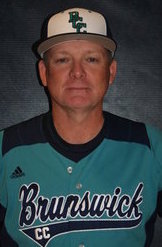 The award was presented in January in Anaheim, California,  as part of the 73rd annual American Baseball Coaches Association Convention.

The ABCA, founded in 1945, is the primary professional organization for baseball coaches at the amateur level. Its over 8,200 members represent all 50 states and 23 countries. Since its initial meeting of 27 college baseball coaches in June 1945, the association’s annual awards program has grown to include nine divisions: NCAA Division I, II and III, NAIA, NJCAA Division I, II, III, Pacific Association Division and High School.